Data is making us liquid

John Battelle, one of the founders of Wired magazine, currently busy at both Federated Media and OpenCo, took the stage at LeWeb London to talk with Loic Le Meur about media, advertising and more importantly – in my view – about how data shapes our identity. From minute 14:00 John discusses the importance of asking one single culture-altering question: who will we allow to be the platform for our data, to whom will we give control, authority and ownership of our identities?

Here is an imperfect transcript of his words:

We as a society are in the process of becoming data. Just think of what is happening with Memoto, or with fitness tracking devices such as the Nike Fuelband or the Fitbit. In a couple of cycles of Moore’s law of those tracking devices […] everything about you becomes data.

You are becoming data, that data is going up into the cloud and is being crawled by intelligent spiders and these spiders are giving you insights back and suggesting how you should behave.

Will our behavior change once we get used to these tools? These technologies will indeed change our behaviors.

This [future] is coming. This is happening, what we have to do is think about what kind of culture and society we want to be when everything that is physical can be represented digitally and therefore made liquid. And we are in the process of making everything physical and every relationship we have liquid.

The collaborative economy is making our assets liquid assets [guest rooms for instance]. We are making cars liquid and sharable. We don’t have a liquid government or regulatory framework and in fact [technology and government] are clashing.

What I am concerned about is that we have all this data, we are each making 565GB data per year – some more some less – that is 5.700 2002 versions of the web per year equal to 3.6 Zettabytes of data and what I worry about is: are we as a society making canonical that we are the platform for that a data or is the platform for that data some company like Google, Facebook or Twitter? Where does that data live and how do we instrument it? I would argue that we need to become the platform for our data; each of us individually should take responsibility, ownership and authority over that. And that conversation has just begun.

That conversation is happening at OUT as YOU.

← Prev: All the demos of EyeEm's Photo Hackday in Berlin in one big doodle Next: Doodling the demos at Battle Hack Berlin → 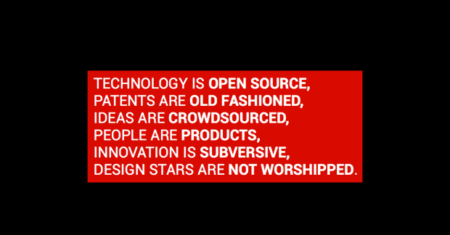 We are approaching a moment of superdensity and I feel fine

Anab Jain clearly delivers an innovative, disturbing vision in her talk “Design for the new normal”. It’s a vision non dissimilar from the...